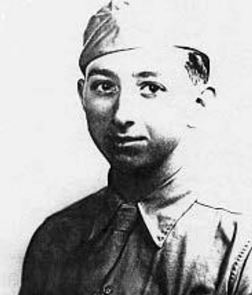 Henry Abbott was raised in Berlin, MD. Following graduation from Buckingham High School he was drafted into the U.S. Army in 1943 and received basic training in Virginia and Mississippi. He was shipped overseas in July of 1944, and as a replacement, was assigned to the 110th Regiment of the 28th Infantry Division. The division was fighting in Normandy in the drive towards the French town of St. Lo with Paris as the ultimate goal. One memory that Mr. Abbott recalled was French Liberation Day. The 28th Division, along with thousands of other soldiers of other allied divisions was participating in a victory parade in Paris, in August. Of all of the thousands of men marching down the Champs Elysees, a Frenchman ran out and handed HIM a bottle of 5 star Hennessy cognac.

In September the 28th Division was fighting in the Hurtgen Forest in Germany. This battle has been determined to be the longest battle the U.S. Army ever fought. It lasted from September of 1944 until February of 1945. The battle had to be fought almost entirely by infantry. Bad weather kept the air force from flying, and dense forest made tanks and artillery impossible to use. Further difficulties were that the division had been sent into battle from the parade in Paris wearing street shoes. The ground was wet and snow covered and many men suffered from frostbite and trench foot. Only later did combat boots get issued. His worse memory of that time was watching his platoon lieutenant slowly die because German machine gun fire was so intense no one could get to him. Total losses for American and German forces were at least 61,000 men. It was here that the Division was nick-named by German soldiers as “the bloody Bucket Division,” due to the shape and color of its keystone shoulder patch, and because the division took heavy losses.

As Christmas approached the 110th Regiment was moved to support the 106th Infantry in the Ardennes. The 106th had been decimated by the huge German offensive that came to be known as the “Battle of the Bulge.” Starting on the 16th of December, 1944, the 110th Regiment along with the remnants of the 106th Infantry sacrificed themselves in order to buy time until the 101st Airborne Division could be trucked to the front to slow the German Panzer Divisions from capturing the key town of Bastogne, Belgium. Their regiment is said to have put up one of the most classic defensive stands in American military history. At the time they were part of General George Patton’s 3rd Army. Abbott was captured by the Germans Christmas week of 1944. The prisoners were forced to march for 23 days to the prison camp Stalog 9B near the town of Badord, Germany.

During the 131 days of his imprisonment the Germans required them to work. His job, with a friend, was to push a cart with metal wheels along a set of tracks. In order to get rest they would purposely derail the cart on occasion. The men were fed potato soup (with very few potatoes,) and black bread. Those that did not work and did not eat became weak and died. Suffering from dysentery, malnutrition, and frozen feet he observed that those who worked and forced themselves to eat survived.

On April 24, 1945 their camp was liberated by the U.S. Army 11th Armored Division. He was flown back to a French hospital. The government paid men that were POW’s an extra dollar for each day of imprisonment. In 1953, eight years after the war he received a check for $ 131.00.

His widow, Mary Abbott, in an interview by the Berlin Heritage Committee, in 1995, on the 50th anniversary of WWII, reported that for meritorious achievement in Normandy, the Hurtgen Forest, and the Ardennes he had been awarded a total of four Campaign Battle Stars.