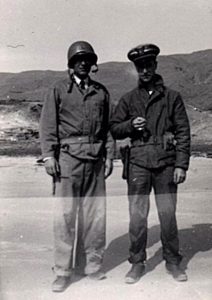 As a young boy in Dallas, Pa. I remember growing up playing with a Japanese rifle that my Dad had hung on the wall of our basement. It still had a bayonet attached. I knew my Dad was in the Coast Guard during WWII and that they were attached to the Navy in wartime. Aside from that he never spoke much about the war and I never asked.

It wasn’t until years later that I suddenly wanted to know more about my Dad’s service. That desire was partly initiated when I found out that, for years, I had listed Groton, Ct. as my place of birth but found, when preparing to apply for a passport, that was incorrect. It was really in New London, Ct. just across the bridge from Groton where my parents had rented a home.

The hospital was in New London where my Dad, a Bucknell graduate in mechanical engineering who had enlisted in the Coast Guard, taught diesel mechanics to the submariners at the sub base. I am not quite sure of the timing but shortly thereafter we moved to San Diego, Ca. and my Dad, now a Lt. Commander, was assigned to the Hunter Liggett as part of her Coast Guard crew. She was an old “ugly” [my Dads words] 1922 passenger liner converted by the Navy into Attack Transport APA-14 1, and scheduled to take part in Americas first offensive operation in the Pacific, the occupation of Guadalcanal.

I now knew why my Dad had that souvenir Japanese rifle in the basement. The Hunter Liggett joined the “Magic Carpet” fleet 10 December 1945 to return American servicemen from the Pacific. The only comment my Dad ever made about his service aboard ship was about a lifeboat breaking loose on the bow in a bad storm and the efforts to get it secured. The Hunter Liggett earned 4 battle stars during the war.  I was surprised to find some old photos after my Dad passed away showing him as Beachmaster on Red Beach in Guadalcanal. I never did thank him for his service but have attempted to make up for that in my later years.

Read more about the Hunter Liggett at the Naval History and Heritage Command website.